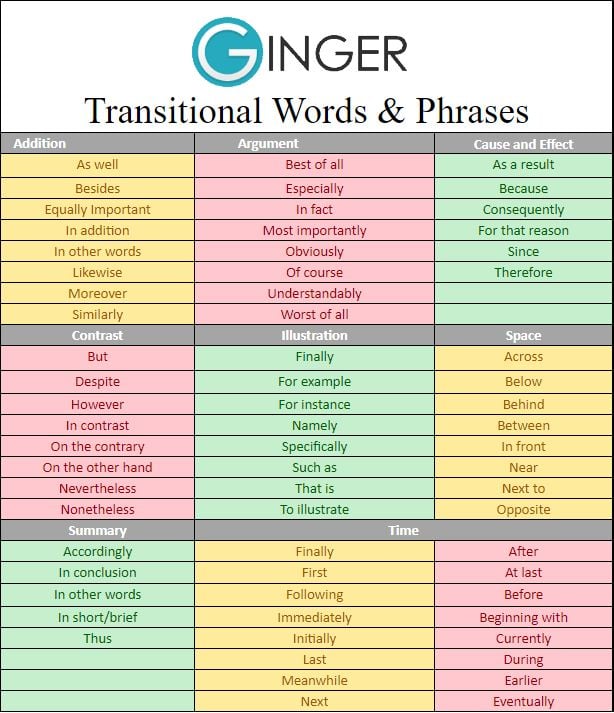 Transition words and phrases are an important part of the English language. They are used to connect words and sentences, often by referring back to one idea and signaling the introduction of a new one. Transition words can also help a passage of writing flow better, although it is best not to overuse them.

The transition word in the above example is instead. It links the two sentences together by referring back to the first sentence and signaling that an alternative idea has been introduced.

Consider the example without the transition word:

The lack of a link between the two sentences leaves things a bit vague. We do not explicitly know that the two sentences are related, whereas the previous example shows that James visited his grandparents as an alternative to going to the movies.

When to Use Transition Words?

Fundamentally, we use transition words to connect sentences and words together. They often refer back to the previous sentence or words within a sentence, and let the reader know that there is some related or new information on its way. There are different types of transition words and phrases, and not all of them have this simplistic explanation for their use.

Consider the passage below, and notice the highlighted transition words and phrases:

I do not like dairy products very much, particularly cheese. However, I make an exception for ice cream, especially chocolate ice cream. Indeed, ice cream is probably my favorite thing to eat. Admittedly, I am also aware that ice cream is very fattening, not to mention full of sugar. In other words, ice cream isn’t very healthy. Nevertheless, life is too short to worry about these things. With this in mind, I will continue to eat ice cream every day. I may end up overweight, of course. On balance, this is a price I am willing to pay for delicious – especially chocolate – ice cream.

Here are some of the main ways transition words are used:

To introduce a new idea or opposite point of view:

To introduce a conclusion:

To introduce a list or point out a sequence of events:

To admit a concession:

To add emphasis or additions.

To introduce clauses and conditions:

Below are some more examples of transition words in sentences:

Why are Transition Words Important?

Without transition words and phrases, language would be somewhat stiff. They sew words and sentences together, helping them flow better by acting as a link to what was previously stated in the passage. Yet, they are more than that, they act as signals in writing to show shifts in ideas, tone and emphasis, and introduce conclusions, sequences and contradictions.

READ:  Prepositions of Time - at, in, on | Grammar

The key to understanding them lies in the name itself: Transition words. Transition means change, and these words indicate that there has been a change or that a change is forthcoming. This change could be subtle, like a shift in emphasis, or more obvious, like the offering of a contrary idea or conclusion, but transition words, nevertheless, act as a signal for that change. In the end, this is important because it gets to the root of how we understand language, as these transition words act like bridges through words, sentences and meaning.

10 German Jokes That Are Actually Funny

Tigers recognized for excellence in education